“Your first time with ICTs”

The workshop started with a presentation of the project. 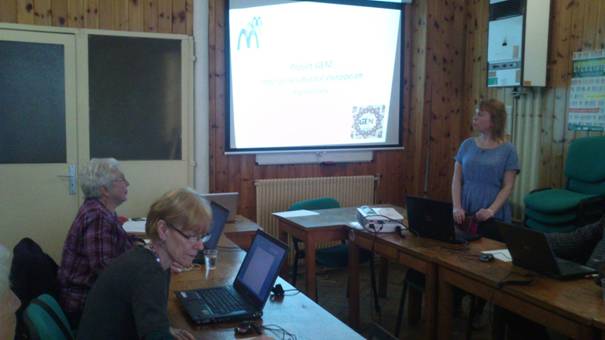 We set up computers and ask to each senior to write about his/her first time with a computer. 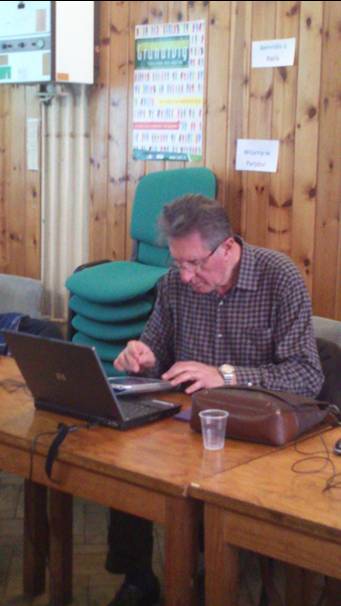 Here are the results of the workshop…

“I am a curious person. I am always interested in new technologies especially in communication and ICTs. It can help human beings to progress.

Even if I am interested, I had some problems:

-         Then, at work, the typewriter arrived in the 70’s but some of my colleagues were already reluctant to use these new technologies. It became more obvious with computers. Today, I frequently ear speeches about previous systems. For instance, in my country, Italy, we had bid issues with retired people. Elderly prefer to interact with human beings rather than machines to withdraw money. Credit cards are still mysterious to them and they are not able to deal with their bank accounts electronically.

My first contact with a computer occurred in the 50’s : there were shelves in several rooms with a lot of small flashlights all connected: it was really surprising.

Then, the « Commodor 64 » was released. It was my first experience with software and program. It had games for my son.

Meantime, first cell phones appeared. They were hudge and very expensive. The first time I used it, I found it amazing to be able to communicate from my car to my office which was 500km far away from me. It was a wonderful experience and I remember it very well. Today, it is still complicated to have contact with my friend (of my age) using a cell phone or emails.

One of the big issues is to have the same informatics level than my friends, family or former colleagues. New technologies can eliminate distances but, most of the time, it is impossible because older people are reluctant to use it. Regarding new generations, there is such a gap between their use of new technologies and mine that it is also impossible to communicate.

“From typing machine to computer

When I was a student, I learned to use a typing machine and I utilized it rather regularly to type or modify documents. I knew rather well the handling of the machine and the various possibilities of pagination. I knew how to use “carbon paper” and other reproduction means such as “stencils”

When I began to work I was helped by a secretary. She was younger than me and just finishing school, she did not manage very well all possibilities of the machine. When I was giving her a work to do and when she was telling me that it was not possible to do it, I used to sit in her place and showed her how to do.

Then the computers came. If I asked the French telephone company to have a “Minitel” to begin to familiarize myself with it, it didn’t mean that I was really enthusiastic.

At the office, secretaries fallowed informatics classes and they were the first to have computers. When I asked a special document to my secretary and she replied that it was impossible to realize, I wasn’t able to tell her anything because of my lack of knowledge regarding computers.

Few moments later, our boss offered to managers to have a laptop. I was a bit panicked but I needed to understand what were the possibilities offered by these machines. So I volunteered to have one of these laptops. I was totally aware of the fact that if managers learnt how to use computers, it will conduct to the suppression of typists’ position.  I founded it unfortunate and dangerous because some of the employees were really good typists but didn’t have others skills. However, I accepted my laptop. My secretary and a colleague taught me how to use it. Then, I fallowed a training course. After a while, I was able to discuss with my secretary when she told me that a document wasn’t realizable and we were able to find a solution together.

These were my first contacts with a computer.

“Writing, reading, communication and its tools.

In my life, I have been using different methods to write:

-         A fountain pen Waterman during my secondary school

I know that first ball-point pens arrived in France in the 50’s but it was forbidden to use it at school or in highschool.

Then, during many years, I’ve been using fountain pen and ball-point pen, like everybody. Later, felt-tip pen came up.

But the real change happened for me in the 80’s when, at a friend’s, I’ve seen a sort of plastic box with a screen. My friend told me “It is a Macintosh”. I had no idea of what could be possible with this amazing tool.

In a few years, this machine gave birth to astonishing tools:

-         PCs or laptops, Mac or Windows. The text processor has been quickly coupled with the Internet permitting to communicate with the whole world at lightening speed (or almost). It is a real revolution that continues and still multiplies its tools and functionalities.

Funny fact: Recently, a Parisian pupil showed me a fountain pen. She told me that her teacher gave one of it to each pupil in her class and that she was really glad to have such a “new thing”. She explained to me that this pen needed to be filled with ink cartridges. She was really convinced that I had never seen a such thing. She is collecting fountain pens since this moment and looking for different models with a preference for old ones. Meanwhile, I am trying to write on my computer every day avoiding to type on it like I used to do on a typewriter. I send emails to my family in the whole world and people tell me : “Why are you writing? You should use Skype, it is useful! Why don’t you have an ebook reader since you enjoy reading?” I don’t want an ebook reader, I prefer books, paper books.

Here we are, I am up-to-date on some techniques and classic for others because I am convinced that future generations will need these classic techniques.

“ I am not European but I have been living in France for more than twenty eight years so I am beginning to feel like a European.

About seven years ago I realized that I needed to get started on computers.  I have lots of experience with administration of a variety of organizations both public and private.  I always used office machines like typewriters, both manual and electric, copiers both manual and electronic, telephones, both those with multiple users and private lines, and filing systems of many types.

My formal education was in the United States and included a bachelor of arts from the University of Iowa, a masters of arts from Michigan State University and a few courses towards a doctorate.  In addition I participated in numerous workshops and conferences related to my work and to my extensive volunteer work.

But the time had come to make the transition to the net.  I did not know how to get started and expressed this to a friend who took me into an internet cafe and set up an email account for me.  Email was relatively easy for me to figure out but when I decided to move ahead and joined an organized class for seniors being given in French, I found that I could not keep up as learning the vocabulary and the methods in a second language was an impairment and the class went very fast.  Since I had decided to learn a sufficient amount using an internet cafe instead of investing in equipment for my home that would only frustrate me, my practice time was a bit limited so I dropped out of the course.

Young people running the internet cafe helped me when I got stuck and after three years I felt I had picked up enough to buy a computer for my home.  A friend who was returning to Canada said I should use her printer, so I set up a little office in a corner although I did not like having all these machines visible.

Shortly after my grand daughter, who was then eleven and living in Jakarta, asked me to join facebook.  Who can say no to grand children?  I asked my daughter to put my photo on the site as friends were asking why that space was empty.  I put a minimum of information on the site and answered any messages but did not post any of my own information.  I used it for messaging when I realized that some people only look at facebook rather than their email.

Occasionally I made mistakes like sending a message to everyone instead of only to the person concerned, but friends set me straight.  My second computer had a touch pad rather than a mouse and it was very sensitive so sometimes it sent the message to the wrong person or made it disappear into thin air.

I have decided not to keep files and deal with every message the same day, trying to avoid reading the message twice. After responding, I print out information I will need and put the rest in the trash.  From my experience with files, I decided that if I kept too much I would never have time or the energy to look for it again or perhaps I would not be able to find it again, so I have never set up a filing system.  Since I have family and friends who save everything and  are tolerant of my decision, I can always but rarely need to recuperate specific information.

Recently I have played around with many types of internet searches, mainly for planning a long trip to the United States, and it has been very helpful but not always sufficient.  There is no doubt that it is desirable and perhaps necessary to enable everyone to utilize a minimum amount of this new technology or run the risk of having them drop out of contact with friends and organizations.  It is becoming increasingly difficult to stay out of the system.  Fax machines were very user friendly but they are disappearing.  Some businesses will only interface by computer so this excludes those who are not minimally adept.  It behoves all of us to pay attention to those who have not kept up and to find ways to keep them in contact with others.

But, actually, my first experience with computers was in 1978 when my husband, who was a researcher for IBM Kingston, New York, brought home a P C and at least 6 heavy systems explanation books.

While I was figuring out when I would have time to read all that boring material my nine year old turned it on and created a matrix so she could beat the neighbor boy playing a Dungeon and Dragon like game.

I only used word processing and when I wrote my annual report for a large organization of which I was President and the printer would not link up and I had to go to the meeting with a lame excuse - the computer ate my document - I lost confidence in this technology and rarely used it until I came to France and registered an email address about 25 years later.