Institute E-seniors created a local partnership project with the Parisian branch of Google Company. The aim of this project was to encourage the use of new technology tools among the elderly and to presented them the possibilities and tools offered by Google.

This partnership, named Age Engage Workshop is a part of the company’s social responsibility policies called « Google Gives ». The principal is that each month, every Google employee has to contribute to a worthwhile effort (about 7 hours).

The first Age Engage Workshop, was held on November 25th, 2013. Seven employees from Google agreed to join this workshop meeting some senior members and voluntary ICT-trainers of Institute E-Seniors.  Overall there were about 20 people during this afternoon. 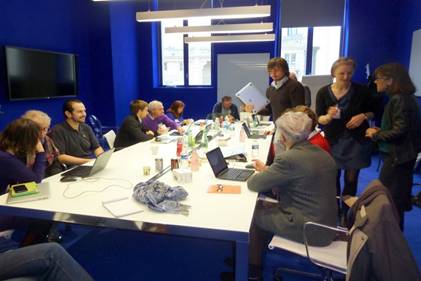 Before the meeting Institute E-seniors asked the participating senior trainees and trainers their expectations and useful topics for them in the workshop. Notably the following issues came up:

·        Advantages of Google chrome compared to other browsers?

Participants worked in tandem (1 Google employee/1 senior or 1 trainer volunteer) on a Chromebook (a computer developed by Google). The idea was that each senior could ask for advice about Internet or Google applications (Google Drive, Google+, google maps) .

The atmosphere in the meeting was relaxed and friendly. According to seniors (including the trainees and  the voluntary ICT-teachers), this first session was very useful and stimulating. They all agreed that Google employees were very pleasant and excited about sharing their knowledge and discussing with them. 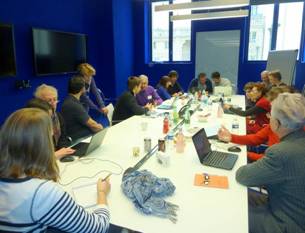 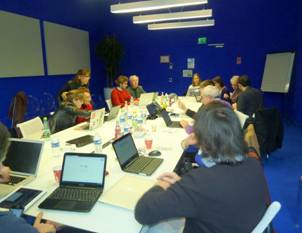 The first feedbacks are very positive from the both sides.

Here are some reactions from seniors and voluntary trainers of Institute E-seniors  :

« This session was a good initiative from Institute E-Seniors and Google. The trainer showed me functions I have never used before and these could be very useful in future. »

« It was a very nice experience, very nice atmosphere. I received very good advices from my trainer and I look forward to taking part in other sessions like this one. »

« Reception conditions and material conditions were both excellent!  I received some advices and initiations as Google Drive. »

And here are some reactions from Google employees:

« Thank you for this opportunity, it was very rewarding. »

« It was a very interesting experience. My « learner » knows as much as I know myself ! The contact and exchange was very rewarding. »

After the meeting we did a "return of experience" with Google, whether in the technical / logistic field and in the educational field so that the workshops as adapted for its public. Several points were raised:

·        Seniors need a "suitable" computer and a chrome book special senior with mouse?

·        During the sessions, it could be interesting to split sessions in two parts:

·        Dispose written material (guides, to help them remember what was discussed)

·        Organize a free exchange in the end of the session to see if they have understood the lessons learned. This could be don for instance in form of a Quiz.

·        Positive aspects for Google: get feedback from senior citizens with respect to their software and usability of their computers.

·        Positive aspects for Institute E-Seniors: improve the ICT-trainer competencies and deepend their knowledge related to the Google tools, which will help them to adapt their teaching techniques.

The 2 partners have agreed to continue the experimentation. Furthermore, Institute E-Seniors will organize a preparatory meeting with its senior participants in order to identify the topics of their interest in advance. The next session is expected to be carried out during the first quarter of 2014.