Overview from the partners countries. 3

Best practices from each country. 5

“Coworking is a style of work that involves a shared working environment, often an office, and independent activity. Unlike in a typical office environment, those coworking are usually not employed by the same organization. Typically it is attractive to work-at-home professionals, independent contractors, or people who travel frequently who end up working in relative isolation. Coworking is also the social gathering of a group of people who are still working independently, but who share values, and who are interested in the synergy that can happen from working with like-minded talented people in the same space.[…] Coworking is not only about the physical space, but about establishing the coworking community first. “[1]

“The term "coworking" was coined by Bernie DeKoven in 1999 and used as a domain in 2000 and in 2005 Brad Neuberg used it to describe a physical space which he originally called a "9 to 5 group".

According to a study conducted by Deskwanted[2] in February 2013, Europe is the continent that has the most of coworking spaces[3] with 1160 spaces across the continent. 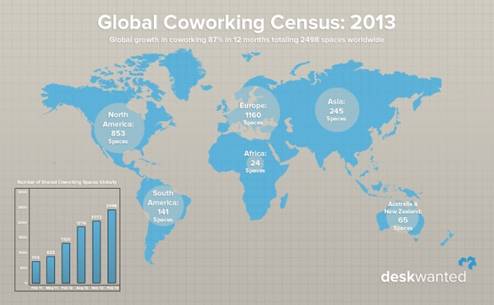 Overview from the partners countries

As of 2012, the UK is among the most responsive European country to the idea of collaborative working, with a special focus on London. The city leads the co-working market not only for the large number of co-working spaces it offers but also for the variety of spaces that exist to fit the differing needs among start-ups, entrepreneurs and freelancers. In March 2012 Google along with several local partners opened a co-working space in the heart of East London. Campus London is located in Tech City and helps multiple start-ups to grow under the same roof, by mentoring them and giving them the chance to learn more through the events that run every day.

France used to be late regarding coworking experiences compared to others European countries. But, since few years, it has changed; France hosted major events such as the European Conference about coworking in 2012. France has now more than 60 coworking spaces. Regional and local authorities, as well as development agencies such as La Fonderie in Paris area, support coworking with organizing calls and events about this topic. Currently, coworking has become a tool for public policies and economic development.

Italy has 91 coworking spaces referenced on the Global Coworking Census 2013.[5] Italy presents a slightly more complex case for the compilers of coworking statistics. There are counted 39 coworking spaces there, though others might find there to be 69. This is because the Italians have a looser definition of what makes a real coworking space. Italy is home to the Coworking Project, an organization that also promotes flexible workspaces within traditional offices and temporary spaces. Pop-up workstations are available in many different locations that might not be considered coworking spaces elsewhere.[6]

St. Oberholz opened in 2005 as one of the first cafes in Berlin to offer free internet access and allowed people to work on their laptop, without considering them to be annoyances. In 2009, Betahaus took the concept to a new level in terms of size and media attention. Since then, the market has boomed. New coworking spaces popped up in all parts of the country – from small villages to big cities.

Spain is one of the champions in Europe regarding coworking. The 4th Coworking Europe conference was held in Barcelona in 2013. Due to the crisis, the unemployment rate increased consequently and therefore people were entitled to start their own business. That is why a lot of coworking spaces were created and in a lot of original places. In fact, buildings and construction were hard-hit sectors. A lot of free spaces were therefore available which was a great opportunity for coworking.

Cyprus is at an embryonic stage in the coworking area. The start-up theme is very new in Cyprus, only now, after the collapse of its economy, but it has been seen lately some initiatives at the governmental and corporate level.

Culturally, Sweden is close from coworking. Places in this country are not numerous since the survey[7] counted 15 places in February 2013. However, experiencing coworking in a country like Finland will permit to find some outstanding venues. For instance, some spaces have been created in historical venues such as the Church of Entrepreneurs.

Finland is the country in Europe where people are the most working from home and yet, coworking is not that developed in this country since the international survey counted only 6 coworking spaces.

Turkeky has 6 coworking spaces referenced on the Global Coworking Census 2013.[9] Coworking is a quite new thematic in Turkey. That is why it is difficult to find sources about it. But there are coworking spaces offered on the Internet. It would be interesting to have a study on what is offered and what really exits.

Best practices from each country

http://www.campuslondon.com/
Campus London is a coworking space, near Tech City, powered by Google.  Seven floors of flexible work space, free high-speed internet and support to fuel ideas, from mentoring programs to networking events and much more.

http://thecubelondon.com/
The Cube’s aim is to make workers feel ‘calm, focused and happy’ through the design of the space.  Co-workers are selected or curetted by The Cube, so as they form part of a complementary group of individuals and companies.

La Cantine is a space focusing on new technologies. La Cantine was the first coworking space in France in 2008. Since its beginning, it has been supported by the local government (Conseil Régional & Mairie de Paris).

Studios Singuliers is a coworking space hosted in a building dedicated to innovative companies. One of his founders, Basile Samson will come and present us their work.

La Ruche is a coworking space dedicated to social entrepreneurship.

Ashoka is the largest network of social entrepreneurs worldwide, with nearly 3000 Ashoka Fellows in 70 countries putting their system changing ideas into practice on a global scale. Ashoka has provided start-up financing, professional support services, and connections to a global network across the business and social sectors, and a platform for people dedicated to changing the world.

http://www.benetural.com/
Casa Netural is a coworking space located in Matera. Matera is a small town and many of its young people have left, moving to big cities to seek opportunity. To activate the serendipity that comes with coworking, you have to bring new people and fresh ideas into the space.

http://betahaus.de/
Coworking space in the heart of Berlin. Several Betahaus around Europe (last to open was mid-December 2013 in Barcelona).

http://agoracollective.org/agora-coworking/
Coworking space created in May 2011. 30% of the coworkers are German and 70% are coming from abroad.

http://welance.de/
The core idea of this space is to pursue collaborative online projects within their coworking space and to apply effectively the freelancers expertise.

http://www.coworkingpaderborn.de/
Located in the city of Paderborn, Netting is a platform for networking and exchange of ideas between stakeholders and different industries.

http://www.utopicus.es/es
Utopic_US is a network that supports new talents, a coworking space where innovative and transformative initiatives launched generates its own projects that bring value to society. But it is also an original concept of coworking space where freelancers professionals, freelancers and companies working in a production environment, collaborative and exchange of services, products, ideas and knowledge.

http://wayco.es/
Born in 2013, and managed by AJEV, now Wayco is beginning to develop its activities as Utopicus space in the city of Valencia.

http://www.ajemadrid.es/garaje/
An area of ​​800 m2 to provide a complete service for entrepreneurs formed by an open space where you can hold events, meeting rooms, training rooms, coworking space, café, chill out, bike parking, kids area, and best the CAR (High Performance Centre) . The CAR is 8 boxes which house the projects of entrepreneurs Madrid. The garAJE is a meeting point of knowledge, ideas and networking opportunities, being chosen to host the headquarters reference events as Google, Pink Slip Party, Innosfera , Spain Sports Network and many more , thanks to its capacity of 114 people.

http://stockholm.impacthub.net/
Impact Hub Stockholm is a collaborative work space where the collective action of its diverse members accelerates inspiration into realization-- creating a sustainable impact in the local community and far beyond.

http://www.entreprenorskyrkan.se/e/hem.html
Nothing strange, just a co-working space in a church!

http://www.soho.bg/
SOHO provides freelancers, entrepreneurs, and other creative professionals with easy and flexible access to a fully furnished workspace.

http://turkey.enjoyurbanstation.com/en/home/
Urban Station is the first place in Turkey (located in Istanbul) designed especially for mobile workers and for those who share the idea that it is possible to work or meet in a different way.

After our first meeting in Paris where we have met a young entrepreneur who created a coworking space, several key points appeared. Then, during the second day we discussed some points in small groups and several ideas appeared.

Questions to ask yourself before starting a coworking business:

·        Is there an existing demand for coworking space? Understand the kind of the demand.

Ideas to be integrated to a business model:

·        Start small then try to reach a critical mass: identify the first target, contact them before starting

·        Decide how to manage your group: be aware about how to manage conflicts: ability to remove members in a relatively short notice (UK: 1 month)

·        Sustainability: how sustainable your products are => general evaluation of your activities is needed

·        Business model: maybe not sustainable at the beginning but absolutely needed

[2] The survey is available on the fallowing website: http://www.zonacoworking.es/wpcontent/uploads/2013/02/Global-Coworking-Census-2013.pdf