Promoting the early stages of the Start-up Communities Concept

1.       Do you consider that your country is advanced in the area of entrepreneurship?

France has a complicated relationship with entrepreneurship. Since few months, the government is trying to change its image regarding start-ups[1]. After announcing some measures taxing start-ups, the government is now trying to seduce entrepreneurs. France has plenty of potential as a source of innovative and competitive new ventures, but has struggled to convert this into solid support for its entrepreneurs. This is an unfortunate reality for a country of this size and at this level of development (it is the fifth largest economy in the world in terms of GDP). An important part of the problem appears to be the lack of a cultural foundation for entrepreneurship. In this area, France’s entrepreneurs were much more negative than their G20 peers, according to the EY G20 Entrepreneurship Barometer 2013[2].

2.       If yes what indicators would you use to evidence this (number of start-ups, number of patents registered, number of self-employed professionals etc)?  If no, how do you think you can benefit from countries where this concept is advanced?

“French Tech” label was just created by the government to accelerate growth among French digital startups, going from “start” to “up” in order to create world players, to establish French startups on the international market and to attract international talent and investors[3].
538 185 companies have been created in 2013 according to the INSEE[4].

More and more incubators in France, plan to have the biggest incubator in the world in 2016 with Xavier Niel’s (Free CEO) project, the “Halle Freyssinet” in the 13th arrondissement of Paris.

Crédit Impôt Recherche (Research Tax Credit) : Launch in 2004, this aims to facilitate access to funding and raise entrepreneurship culture. The research tax credit provides corporate tax relief for R&D expenses. It supports companies’ R&D efforts and increases their competitiveness by allowing a 30% deduction on the first €100m of R&D expenditure and 5% thereafter. After its reinforcement in 2004, the number of businesses using the credit has increased by 80% since 2008, to 18,000 companies. The credit has generated total tax savings for businesses of more than €5b.

3.       Which factors do you consider as most critical for the development of an entrepreneurial culture?

The level of taxation is perhaps the clearest obstacle, both in terms of its direct effects on entrepreneurs, and as a symbol of the country’s relative unease with private enterprise. Business taxes are above the average for mature economies. And although the Government’s attempt to introduce a 75% tax rate on wages above €1m has yet to be clearly defined and implemented, it has sent an unfortunate signal about the country’s support for entrepreneurship.
The labour law is also very rigid and the work force is highly taxed. 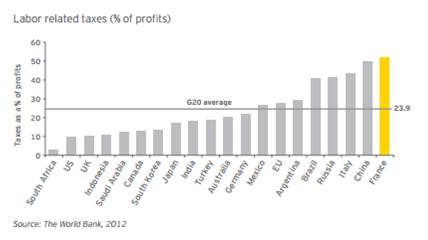 4.       Which method(s) would you consider as the most appropriate to assist countries lagging in the entrepreneurship, i.e. helping entrepreneurs gain access to institutional/angel investors, transferring expertise through an online platform, providing online support in the evaluation of business plans, providing access to networks where entrepreneurs meet.

International initiative such as crowdfounding and business angels should be disseminated. This would be possible by a intense communication; online plateforme is a way to achieve that. It could be a good idea to have a “.eu” address available in several EU languages to communicate about successful projects. It could emphasizes on testimonies.

5.       Do you think entrepreneurship can be promoted by the government or through private initiatives (i.e. via innovation schemes or via the development of a network of angel investors or both)?

Both; it is the role of the government to encourage innovation and entrepreneurship by facilitating creation and development of start-ups. Taxes mustn’t be too high and labour

law need to be adapted. On the other hand, government can’t be the only one promoting entrepreneurship. Private initiative need to be encouraged such as business angels.

6.       How would you define the role of the European Union in the entrepreneurship arena?

EU initiatives are not very well know in France. This is probably due to the importance of governmental grants addressed to start-ups. But after some researches, we can find that EU is committed in entrepreneurship, even providing a web page gathering good practices in Europe[5].

7.       Do you consider project management and planning as a critical area for the success of a new venture?

Not critical but definitely fundamental and need to be defined before launching the project.

8.       Please define the most important stages in which you would you divide the effort required for a new start-up (i.e. concept development, design, prototyping, commercial deployment).