What is a Repair Café? A Repair Café is a place where people can bring their old/broken/in bad shape stuffs and some handymen are there to explain them how they can fix it instead of throwing it away. The motto of Repair Cafés speaks for itself “Don’t throw anything away, there is no (a)way!”. So, Repais Cafés are mainly fighting again over-consumption and planned obsolescence.

The first Repair Café appeared in the Netherlands in 2009 thanks to Martine Postma from Amsterdam and Peter Van Vliet from Groningen. The idea is simple, clever and easily reproducible. That is why we decided to create our own Repair Café in Paris, the first in the French capital. In order to achieve this goal, we first had to create a special association, Repair Café Paris. Then we had to find some places ready to welcome us with our idea. As the idea is seducing a lot of people, it wasn’t complicated to find some places. Repair Cafés in Paris are held once a month since April 2013. 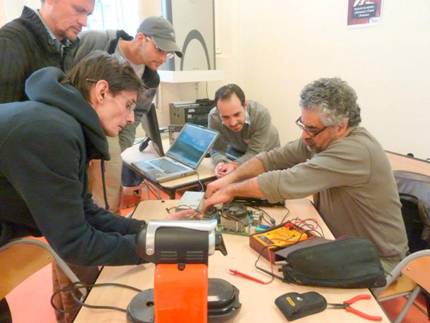 As the initiative was new in Paris, media were really interested in our action and came to film, interview and take pictures. All the Repair Cafés held in Paris were real success; the last one was such a big success that all the handymen were overbooked! 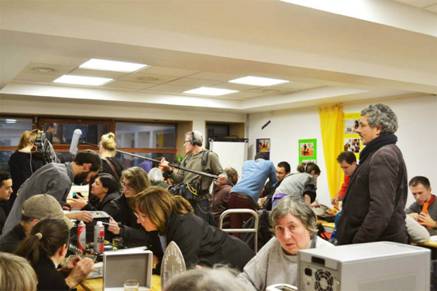 Repair Café held the 30th of November 2013 at the Espace Riquet, Paris.

Repair Cafés have therefore a bright future waiting for them in Paris. The initiative is more and more well known.

We have we have planned, the 5th of April  a “Great Celebration of the Depanne”  during the French national week for Sustainable Development, for the first birthday of his creation.

We recorded this event on the website of the Ministry of ESS.

It was  a massive Repair Café  with also conferences and experts from all around Europe including both founders from the Netherlands.

The file of the program : http://www.e-seniors.asso.fr/fetedepanneAvril2014.htm